Reading and the brain

Neuroimaging studies tell us what happens in our brain, when we read and what kind of differences there are at the brain level, when we compare normal children and children with reading disabilities. The main finding is that the functional system needed for proficient reading requires the concerted participation of several brain regions. Different brain systems activate during different reading-related tasks, and the single regions of cortex are necessary but not sufficient to the overall process of skilled reading.

The tree most important areas in the left hemisphere are described in the following figure: 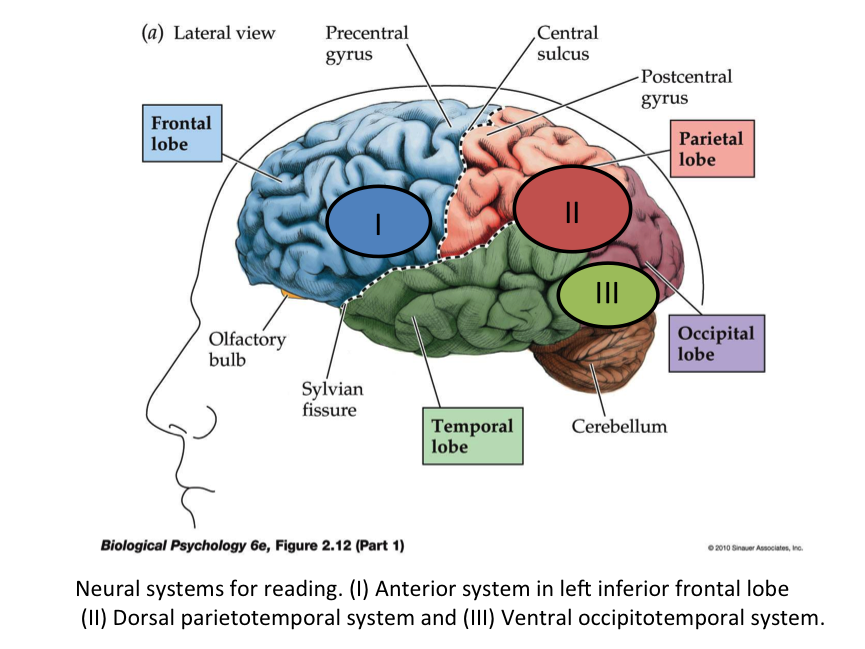 The first area in the figure (I) is so called Broca’s area in the frontal lobe. It is related to articulation and word analysis. The second (II) area is important for creating letter-sound connections and it is most important in the first and slow stage of reading development. The third one (III) is needed for whole-word recognition. This visual and fast system is needed for fluent reading.

In order to read, the beginning reader must break the code, that is, transform the visual features (letters) of the word into the linguistic sounds (the phonemes) they represent and then access the meaning of the word. The second system is critical for that.

Children with reading difficulties have often problems in doing that, and they may try to compensate these problems by shifting to other systems. They may use the first (I) anterior system, which is critical for articulation. By forming the word with their lips, tongue, and vocal apparatus may help dyslexic readers develop awareness of sound structure of the word. Or they may use the third (III) system facilitate visual pattern recognition compensating for the impaired word analysis system (II).

Children with reading disabilities may also use occipitotemporal area in right hemisphere to facilitate visual pattern recognition, compensating for the impaired word analysis systems in the left posterior regions. This shift to ancillary neural systems may support accurate, but not fluent and automatic word reading. The reading systems are not working so smoothly and integrated as observed in non-impaired readers.